Factory output growth surprised in April hitting an eight-month high of 7.1 per cent up from 2.2 per cent in March.

The sharp increase in industrial growth comes after data released last month showed that the country’s eight core industries grew 8.4 per cent in April, up from the revised 4.9 per cent in March.

What is ‘Index of Industrial Production’?

The Index of Industrial Production (IIP) is an index which shows the growth rates in different industry groups of the economy in a stipulated period of time. The IIP index is computed and published by the Central Statistical Organization (CSO) on a monthly basis.

IIP is a composite indicator that measures the growth rate of industry groups classified under,

Currently IIP figures are calculated considering 2011-12 as base year.

3. Natural gas: Its total weightage is 6.88% in the core sectors

4. Refinery products: Its total weightage is 28.04% in the core sectors

7. Fertilizers: Its total weightage is 2.63% in the core sectors

8. Electricity: Its total weightage is 19.85% in the core sectors

The eight-core sectors comprise 40.27% of the weight of items included in the Index of Industrial Production (IIP).

The IIP is compiled using data received from 16 sources agencies; The Hindu Analysis

5. Ministry of Petroleum and Natural Gas

7. Department of Chemicals and Petrochemicals

What is the meaning of base year in the Index of Industrial Production (IIP); The Hindu Analysis

What base year shows : The Hindu Analysis

The Sectoral composition of the IIP is as follows : The Hindu Analysis

The new series of IIP has a total of 809 items occurring in the manufacturing sector in the item basket (405 item groups).

The Index of Industrial Production was bolstered by a sharp growth in manufacturing at 6.8 per cent, while mining and electricity output surged 7.8 per cent and 11.8 per cent, respectively, according to data released by the Statistics Ministry.

The following table giving the use-based classification; The Hindu Analysis 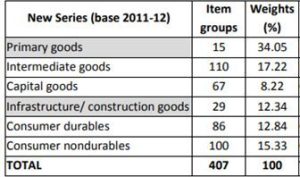 In this article we mention all information about April IIP sizzles, hits 8-month high of 7.1%  Today Current Affairs.