A countrywide protest over the death of a young Iranian Kurdish woman in the custody of Iran’s morality police. 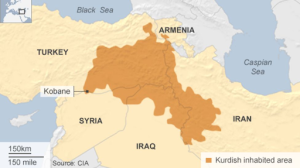 Why have they been considered a stateless tribe?