Russia Ukraine Crisis and relevance of the NAM

02 Mar Russia Ukraine Crisis and relevance of the NAM

Context : New Delhi’s present position apart, the only lasting principle in foreign policy is the principle of national interest. Many people start to ask, “Where are the values of NAM for India ? Is NAM  diluted ? Has India left the NAM ? Has NAM lost its credibility ? India has left its ethical and traditional value system of Ahimsa . In present situations the decision taken by India is only to protect national interest. National Interest is first priority in the foreign policy other values and the principles are secondary for the fixation of foreign policy of any country 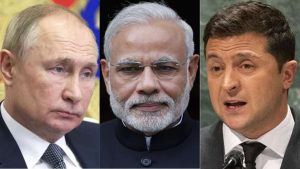 Ukraine Russia crisis has been continuing for 6 days and India is continuously indirectly supporting Russia and at any time of the moment India did not condemn the Russian Aggression . India has been the founder member of the NAM (non Alignment Movement). The basic values and principle of NAM was to follow ethical and moral values . As being the member of NAM , India should condemn the Russian aggression , but simultaneous , we must see the national interest also

The death of the Truth during the war is the real causality . No government tells the truth about war to its people“,  certainly not the whole truth. This is true of all governments at all times in all countries. India’s war with China ended in 1962. Sixty years later, we still do not know all the truth about that war.

Why does India have to support Russia ?

India has been the traditional friend of Russia for a long time and we are the strategic partner of Russia and on many occasions, we got the support of Russia in the past . During the liberation of Bangladesh, Russia supported India without any terms . However, India also supported Russia on many occasions but as per the principle of NAM, we opposed the Russian aggression in Past . We opposed Russian support to North Korea and the Russian aggression in Balkan countries

In the Russo Ukrainian War, Initially India thought that This War would be concluded within 2-3 days and the Russians would not conquer Ukraine as Russia declared before the war. Russian concern of the defense in Europe is genuine and India recognizes those Russian Concerns. Therefore India supported Russia . The North Atlantic Treaty Organization (NATO) is already at its doorstep. The saga of broken promises and commitments, albeit oral, given at the highest level by the West to Russia that NATO will not be expanded eastwards, closer to Russia, is well documented. West should give some assure to Russia regarding its security. But West did not do.  The distrust towards Russia lies deep in the western psyche. However entire world is condemning Russian aggression but only Russia is not culprit . All the big powers of the world is equally culprit

Should India change its stand

Foreign policy of any country is not based on fixed terms. As per the changing nature of the world the foreign policy of any country should change. As per the present situation the world is raising the question on the existence of the NAM and the ethical and moral and traditional value system of India and the sympathy of the world toward the Ukraine is continuously increasing , in this situation India should rethink about her own decision. If India continue on same stand, the QUAD could be weak and India could be expelled from the QUAD and the hostility from the side of western country is continuously being increased . Therefore after certain time India should change her stand nd pressurize Russia for the cease and negotiation . This is the tough time for India. As is often maintained, India-U.S. relations have never been better. This is true especially in the defense sector. Much is also made of the famous Quad (India, the United States, Australia and Japan) which is essentially an arrangement to contain China. How that helps India, the only one in Quad having a territorial dispute with China, is not clear.

Whether India has left NAM

No , India has neither left the NAM nor will be leaving NAM in future but to protect the interest of the country India has to slightly tilted towards Russia and in Past many time India had to support Russia however he has been the member of NAM

The Big Challenge for India

Present situation is a very Crucial situation for India. One side India has to show her neutrality and on their side India has to maintain her friendly relation with Russia as well. India can not buy the hostility from the west as well as Japan and Australia also because India has to counter China in future . Therefore , India has to take any step in very balanced way

As per the above analysis, the coming 5-6 days are very crucial days for India. India has to maintain friendship with Russia as well as good relations with the West. India should neither dilute NAM nor should QUAD nor should BRICS. India is one of the most powerful countries also , so India can play an important role in peace establishment. India should start its positive talks to western countries with America and EU and pressurize them to address the security concerns of Russia and simultaneously India should pressurize Russia for cease fire . This time the support of the Russia is in the favor of national interest and for national Interest now India should shift her stands