One nation, one law, demand for Uniform civil code

20 Oct One nation, one law, demand for Uniform civil code

GS  II: Government policies and interventions for development in various sectors and issues arising out of their design and implementation. 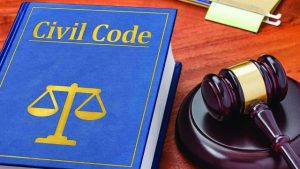 What is article 44 of the Indian constitution?

About the Uniform Civil Code

What is the Directive Principle of States (DPSP)?

Difference between Fundamental Rights and DPSP in India

Does India don’t have any Uniform Civil Code?

Why UUC is not needed at this point?

Our Daily Current Affairs for UPSC include Daily News and Important Editorials. We cowl Daily News by selecting the maximum applicable subjects from some of the newspapers like The Hindu, The Indian Express, etc. plus quite a few countrywide and worldwide information websites like PIB, BBC, CNN, etc. All information gadgets are well-highlighted, bulletized, and tagged for smooth analysis and research. Sometimes we additionally encompass applicable infographics and diagrams in those information gadgets. Similarly, for Important Editorials, we depend on very straightforward sources –  though often countrywide, like The Hindu and Live mint – for our each day cowl. We preserve editorials as quickly and specifically as it might permit. We additionally bulletize sure factors of significance to make the articles extra presentable. The topic described above is related to Indian Polity and Governance. Nowadays it is very important for any UPSC aspirant to reading Current Affairs for UPSC examination. So everybody should accustom to reading Current Affairs for UPSC examination. Plutus IAS provides you with the Best Current Affairs for UPSC examination