The polar ice caps are melting due to climate change caused by global warming. According to NASA, Artic ice is melting at a rate of 13% per decade, and the oldest thickest in Arctic ice has declined by 90% in the last 30 years.

As per the IPCC report, Artic is likely to become ice-free by 2050. 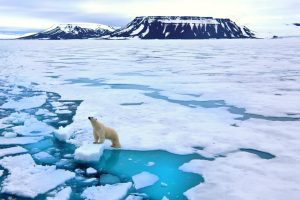 Reasons for the fast rate of Melting in the Arctic: Impact on Weather Patterns of the Planet: