The topic is based on Collegium System. The article talks about how this system impacts Indian Polity and Governance.

Relevance for Prelims: Collegium System, Evolution of this System, Separation of Powers.

Context: The vice president commented on the ongoing heated debate between the Central government and the Supreme Court over the matter of judicial appointments. Referring to the 2015 verdict of the SC which struck down the National Judicial Appointments Commission (NJAC) and the 99th Amendment, VP asked how the judiciary could have run down a unanimously passed constitutional provision that reflected “the will of people”.

The Collegium system is a system of appointment and transfer of judges which has evolved through a series of judgments of the apex court and does not find any mention in the constitution of India. It is considered judicial innovation. 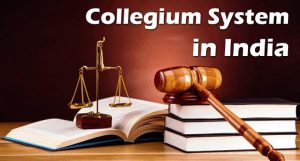 Evolution of the System

In August 2014, Parliament passed the Constitution (99th Amendment) Act, along with the National Judicial Appointments Commission (NJAC) Act, which together provide d for the creation of an independent commission to appoint judges to the Supreme Court (SC) and High Courts (HC).

This commission was to replace the collegium system

The two Bills were ratified by the required number of State Legislatures and got the President’s assent on December 31, 2014. Articles 124 and 217 of the Constitution deal with the appointment of judges to the SC and HCs of the country.

Article 124(2) states “every Judge of the Supreme Court shall be appointed by the President” after “consultation” with the judges of the SC and the HCs. So, while the collegium system itself does not figure in the Constitution, its legal basis is found in three SC judgments — usually referred to as the ‘Judges Cases’.

Notably, the Act empowered any two members of the NJAC to veto a recommendation if they did not agree with it. In the system, seniormost judges make appointments to the higher judiciary.

This is a time to revisit the system either through presidential reference to the Supreme Court or constitutional amendment with appropriate changes in original NJAC law.

There should be an institutional basis for considering names from the Supreme Court bar, rather than considering them on an ad-hoc basis.

Also, Read Weekly and Monthly Current Affairs from your site :