Extended Range of Brahmos : A new milestone in the field of defense sector

Home > Current Affairs  > Extended Range of Brahmos : A new milestone in the field of defense sector

21 Jan Extended Range of Brahmos : A new milestone in the field of defense sector

Extended Range of Brahmos : A new milestone in the field of defense sector- Today Current Affairs

Context : In the supersonic cruise missile BrahMos some new increased indigenous content with its extended range and improved performance is now tested. By 20th Jan 2021 This missile with increased features were successfully tested from the Integrated test range , Chandipur of the coast of Odisha

Indian missiles are used for various purposes in Indian Defense Strategy. These missiles are not only for our rivals China and Pakistan but to strengthen the Indian defense sector for International peace. We never believe in aggression first and on the other hand we have to protect ourselves from the aggression of our traditional enemies .

For the sovereignty of any country the defense sector must be strong . Peace and stability always lie in the hands of the strong country . Therefore ,we also focus on the defense sector . Missiles are the main strength of any country . Those countries which have more advanced missile systems are powerful countries of the world . There are many missile in Indian Fleet like Nirbhay , BrahMos, Sagarika/Saurya , Agni V, Agni IV, Agni III,  Agni II, Agni I, Prahara, Dhanush , Prathvi II, Prathvi I.

The first version of Brahmos is prepared by India and Russia. This is a short range , ramjet power and single warhead missile . It is a supersonic missile which can attack against cruise missile and the ship missile

A joint venture of DRDO (Defense Research and Development Organization ) of the Ministry of Defense, Government of India  and Russia’s Mashinostroyenia Company was set up in 1998.

In 1998, a joint venture was set up between the Indian Defense Ministry’s Defense Research and Development Organization and Russia’s Mashinostroyenia Company. 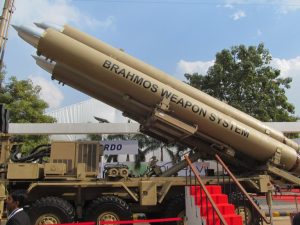 BrahMos missile is being prepared for its hypersonic version by Russia and India jointly . Simultaneously, India is modifying it with ingenious technology as well as its increased range .

The new missile followed a modified optional trajectory for enhanced efficiency and improved performance . The missile with modified controlled system has been fine tuned to achieve an enhanced capability. The highly – maneuverable missile cruise at supersonic speed for its maximum range and all mission objectives were met . The flight test was monitored by all the sensors of the range instrumentation , including telemetry , radar and the electro optical tracking system deployed across the eastern coast and the down range ship.

The missile is capable of being launched from land , sea, sub sea and the air against surface and sea based targets and has been long inducted by the Indian armed forces .

Definitely the date of 21st Jan 2022 is the witness of a milestone in the defense sector  with the advancement of the BrahMos missile . These developments in the defense sector will be helpful for the stretching Indian Army  as well as to counter the Chinese aggression . For the last 2 years China is continuously showing her aggression near LAC. In the last few days one Indian citizen from the border of LAC was abducted by Chinese PLA . In such tense situations, definitely this test of missile with upgraded feature is commendable

Here we mention all information about Extended Range of Brahmos : A new milestone in the field of defense sector Today Current Affairs.