Context : 16th september is recognised as the world ozone day which is celebrated across the world with more cheers and this year(2022) as the Montreal protocol is 35 year old.

In 1994, the United nation General Assembly accepted the proposal to celebrate 16th of September as Ozone day to mark the day of signing of the Montreal Protocol. Since then the day has been celebrated with enthusiasm across the world to beat the depletion of our ozone.

WHAT IS OZONE DEPLETION?

It is the process of breaking down atmospheric/stratospheric ozone (O3). The process is quite dominant at the south pole (above Antarctica) . The commonly identified ozone depletion are halogenetic compounds ( bromine , chlorine, fluorine). Brominated compounds have more potential than chlorinated (CFCs). The man-made pollutants and chemicals identified as depletion are-

THE HISTORY BEHIND THE MOST SUCCESSFUL TREATY

With the advent of industrialisation and massive urbanisation in the developed world and later in the developing world, earth started to show adverse consequences of uncontrolled and unrestricted growth. WIth the more research and understanding of the symptoms (floods,cyclones,droughts etc) later many buzzwords came to the fronts like global warming,greenhouse effect and ozone depletion.

The world was at common agreement to control the menace the overall humanity is facing and thus, in 1985, with much more debate and discussions Vienna convention for the protection of the ozone layer was finalised. Later, in 1987, the Montreal Protocol was signed with clearer and defined targets with commitments from all world countries.

On 16th Sept 1987 the treaty was signed by countries and accepted in letter and spirit. It sets the target for phased reduction of Chlorofluorocarbons (CFCs) in use. It is one of the most successful global treaties on the count as ratified by every country in the world in 2009 (UN Website). It has successfully removed the use of CFCs except in some essential health and industrial equipment. Later in 1992 the phased reductions of the Hydrochlorofluorocarbons were also targeted with different timelines for developed and developing countries. 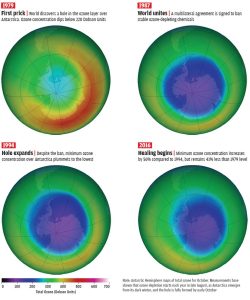 In 2019, the world again agreed to totally phase out the HCFCs which were allowed as transition to switch from CFCs as there was no immediate alternative available. But later it was realised that HCFCs are though not significantly contributing to the ozone depletion but are contributors for greenhouse gases. Thus, the Kigali agreement was ratified to finally phase out use of HCFCs with some concessions to the developing countries, by 2045.

THE RESULT IS ROCKING

The combined effect of phasing out of hologenetic depleting compounds is so cheerful. The recovery of the ozone has been registered by the scientists. Scientists predict that the ozone depleting process has been averted successfully. The ozone will recover to the pre-1980 level by 2070.

THE LEARNINGS FROM THE STORY

The ozone depleting episode has brought humanity a common platform and signified the need to discuss the critical issues. Its successful predicted aversion shows that when science supports combined efforts and common will converges nothing is impossible for the global community.

We should be thankful to the ozone and the Montreal protocol that it has given us a chance to realise our true potential and its success not only lies in controlling ozone depletion but reversing all threats humanity is facing now and in the future.