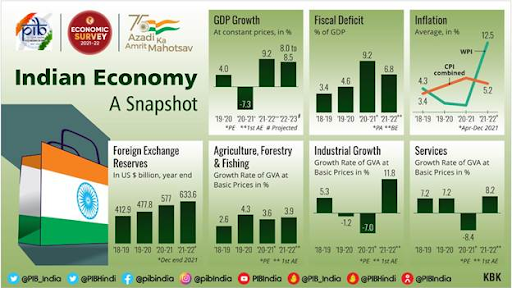 The Indian economy along with the world economy faced unprecedented challenges because of repeated waves of infection,  supply chain disruption due to lockdown restrictions and the resulting inflation, particularly when it comes to policy making. The Government of India made important policy changes to protect the vulnerable sections of the society and the business  sector.

The Government of India is trying its best to boost the medium term demand by increasing capital expenditure on infrastructure And also looking into supply side measures to prepare the economy for a sustained long term expansion.

The Indian economy is expected to grow 9.2% in 2021-22 in real terms ( Real GDP Growth).  Quarter 1 of 2021-22 witnessed smaller economic impact than what was experienced during the full of lockdown phase in 2020-21 even though the health impact was even more.

The services sector which has been hardest hit and is estimated to grow by 8.2 % in this financial year, following last year’s 8.4% contraction.

Total consumption is estimated to grow by  7% in 2021-22,  with significant contributions from government spending. Gross fixed capital formation also exceeded the pre pandemic levels because of the ramped up public expenditure on infrastructure.

Exports of both goods and services have been exceptionally strong so far in 2021-22, but imports also recovered strongly with recovery in domestic demand as well as higher international commodity prices. Today Current Affairs.

The Indian economy is in a good position to witness 8 to 8.5 % GDP growth in 2022-23, because of the fact that economic momentum is building back as the bulk of the population is vaccinated and the likely long-term benefits of the supply side reforms are in the pipeline.

The global environment is still uncertain as a new wave in the form of the Omicron variant is sweeping across the world and inflation has jumped up in most countries. Major Central banks are withdrawing the liquidity. Hence it is high time to look into macroeconomic stability indicators and their ability to provide a buffer against the above stresses.

India’s Balance of Payment remained in surplus throughout the last two years,  despite all the distractions caused by Global Pandemic. Forex reserves of the Reserve Bank of India stood at 634 Billion Dollar on 31st December 2021. This is equivalent to 13.2 months of merchandise imports and is higher than the country’s external debt. The combination of high foreign exchange reserves, sustained foreign direct investment, and rising export earnings will provide an adequate buffer against possible global liquidity tapering in 2022-23.

Fiscal deficit and government debt has risen in 2021 because of fiscal stimulus given to the economy as well as health response. The storm we want in government revenues in 2021-22 is suggesting that the government will comfortably meet its fiscal deficit target, along with maintaining the support to the economy and ramping up capital expenditure. The Hindu Analysis.

India’s capital market has done exceptionally well and has allowed  record mobilization of risk capital for Indian companies. The banking system is well capitalized and the overhang of non performing assets seem to have structurally declined.

Vaccination should be treated for now as a macroeconomic indicator because it is critical for opening  up the economy, not merely a health response.  Over the course of a year, India delivered 157 crore doses that covered 91 crore people with at least one dose and 66 crore with both doses. The vaccination process for boosters and for the 15-18 year age group was also gathering pace at the time of writing.

Inflation in India in terms of consumer price index stood at 5.6 % on a year-on-year basis in December 2021, which is within the targeted band of the monetary policy. Wholesale price inflation, however, has been running in double-digits. Although this is partly due to base effects that will even out, State of the Economy 3 India does need to be wary of imported inflation, especially from elevated global energy prices. Today Current Affairs.

Another distinguishing feature of India’s response has been an emphasis on supply-side reforms rather than a total reliance on demand management. These supply-side reforms include deregulation of numerous sectors, simplification of processes, removal of legacy issues like ‘retrospective tax’, privatisation, production-linked incentives and so on.  Even the sharp increase in capital spending by the Government can be seen both as demand and supply enhancing response as it creates infrastructure capacity for future growth.