Let’s look into Current Inflation and its effect for a developing countries like India (GS 3, Economics, The Hindu, Indian Express, RBI)

14 Jan Let’s look into Current Inflation and its effect for a developing countries like India (GS 3, Economics, The Hindu, Indian Express, RBI) 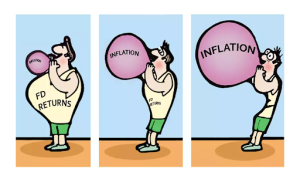 News/ Context: Retail inflation is on rise for the third consecutive month in December 2020-21. In December 2021 it was at 5.59 % which is slightly less than the 6% upper ceiling of the RBI. The rise in inflation is basically because of an uptick in food prices.

In days to come also because of heavy rainfall in some states and state wise Covid restrictions, supply chain disruptions can take place  and  thus surge in the prices of food items.

Due to  pandemic restrictions post covid,  inflation could be witnessed in almost all manufactured products basically because of reduced supply in the market out of reduced production.

If we look into the situation of inflation in the US, its surge to 7% in  December on a year on year basis, which is the highest since1982. It is mainly because of the increased expenditure by the Americans post pandemic  as most of them  got healthy pay increments. Increased expenditure has put up side pressure on aggregate demand and this higher aggregate demand creates inflation (Demand pull Inflation). Aggregate demand on domestic goods and services  increased also because of the fact that Americans cut back on travel and commuting these days.  However now this inflation is off setting the pay increment and making it difficult for lower income families to manage the basic needs.  The Federal Reserve is about to accelerate its interest rate hikes. This has put huge pressure on the US government to the needful  as higher inflation damages the popularity of any government drastically.

We have seen huge protests broke out in Kazakhstan these days basically over fuel price hike, although public resentment was building up against the ruling elite but the fuel price hike  triggered the protest.

In another paper released by Reserve Bank of India, It is said that households are changing their savings portfolio with respect to bank deposits, as future inflation is expected on a higher side. Inflation expectations play a vital role in regulating household consumption behavior and consequences.

Firstly, during high inflation periods people will not have much left to save because now things are costly. More money would be going into consumption.  Hence their capacity to save in banks comes down.

From a country’s perspective (macroeconomic perspective) it is better that savings should come in the banking system. Because banks can mobilize these savings into  investment by lending to someone, which ultimately can create capital formation. Thus the country will get infrastructure or other capital formation which will enhance our future production and future productivity.  Domestic savings is the most important determinant for the growth of a developing country like India. These favorable things / constructive investments will not happen for the country and economy in case people invest in commodities such as precious metals, jewellery and the like or other unproductive assets.

The paper titled ‘Taking Cognisance of Households’ Inflation Expectations in India’ submitted to RBI also says that in the case of a developing economy like India, it is desirable for households to save in financial instruments like debt and equity or Bank deposits which can be used further into production enhancing activities. It is to note here that similar to India,  inflation expectations are biased and not efficient in other countries too such as England, US, Newzealand, Japan, Russia, South Africa etc.

Hence the jobs of the government, especially of the developing countries like India are to control inflation and make the investment in debt, equity or Bank deposits more attractive.