Let’s Understand the Issue of Deputation of IAS/IPS officers 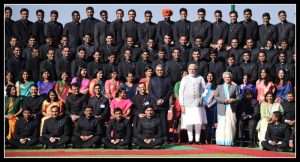 The Central Government has proposed changes in the service rules regarding deputation of cadre officers  mentioned in clause 6 of the  in The Indian Administrative Service (Cadre) Rules, 1954.

(Cadre refers to a state or group of states/union territories to which an officer of an All India Service like IAS or IPS may be posted.)

It is to note that states are required to send IAS officers as per the Central Deputation Reserve (CDR) obligations, which are not being met and much lesser.

In case of any this agreement regarding the  deputation IAS cadre to centre, the state governments  are having override powers. The proposed changes in Indian Administrative Service (cadre) Rules, 1954, is about to take away the powers of the state government. The Hindu Analysis.

According to the Department of Personnel and Training (DoPT) the number of IAS officers deputed to the Centre has gone down from 309 in 2011 to 223 at present.

The insufficient number of IAS officers at the Centre is affecting the functioning of the central government  as the Centre needs the services of these officers to get fresh inputs in policy formulation and program implementation.

These officers get vast field experience (of administration,maintaining law and order,  execution of policies,  collection of taxes etc.) while serving as SDMs and DMs at sub-division and district level  and understand the ground reality. After getting field experience for around 18 years they are moved to State Secretariat and  Central Secretariat where they work for state government and Central Government respectively in their respective policy planning and formulation.

To utilise their vast field experience the centre requires the state to depute these officers to the Central Government insufficient number  as per the Central Deputation Reserve (CDR) obligations.

The states reportedly have a shortage of officers in their cadre and that’s why they are not able to prescribe sufficient numbers. The Hindu Analysis.

The movement of officers from  State to Centre and from Centre to State is beneficial for the  professional growth of officers as well as it provides better coordination between centre and state for the effective program implementation.

Thus the proposed rules which are problematic, are that the states shall give effect to the centre’s decision regarding the deputation of officers within a specified time and in some specific situations in the public interest, States would have to depute certain officers whose services are sought by the central government. The Hindu Analysis.

During covid pandemic the states were much dependent upon  the bureaucracy. Thus the central government must address two questions. First, whether deputation to the central government be done at the cost of a state requirement  and second, what about if a particular officer is reluctant in moving. It has been reported that  officers do not like the top don’t  culture in the central government offices, given it is stiff and a little rigid, whereas they enjoy and prefer the relative autonomy at the state level (being SDMs, DMs and Secretaries at the State Secretariat).

In regard to the essence of federalism in the Constitution,  there is an urgent need to formulate balanced rational rules so that services of these officers(IAS/IPS) could be best utilised by the States as well as Centre and not at the cost of one another.

In this article we mention all information about Let’s Understand the Issue of Deputation of IAS/IPS officers Today Current Affairs.