WHAT IS SATELLITE INTERNET

In Satellite-based internet, wireless internet is beamed down from communication satellites orbiting the Earth. It does not make use of wires. Satellites are placed either in Lower Earth Orbit(LEO) or geostationary orbit(GEO). Internet service providers send an internet signal to a satellite located in space. This signal is then sent back to the user which is captured by a satellite dish that is connected to the modem of the user. 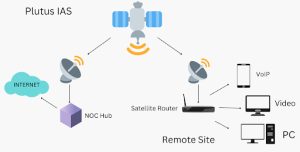 HTS is a communication satellite that provides more throughput than conventional communication satellites (Fixed Satellite Service). By utilizing the same amount of orbital spectrum as FSS, HTS provides a greater capacity than FSS and thus not only increases efficiency but leads to decreased cost. FSS generally use the broad single beam to cover a vast expanse of geographical area. This reduces its spectral efficiency.  HTS, on the other hand, uses a large number of “spot beams” with smaller footprints, each covering a smaller area. Therefore, each beam will provide a separate signal, and hence the overall system will have improved spectral efficiency, leading to enhanced speed, higher data processing, and better transfer capacity. 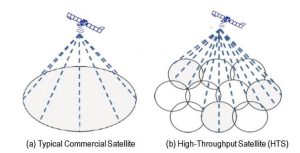 Satellite internet can be used to provide access to the internet to the whole world. It can bridge the digital divide, help rural areas get access to telemedicine and distance learning, and help India develop at a faster pace. The drawbacks must be addressed and outer space is utilized responsibly. The draft Indian Spacecom Policy, 2020 which will provide a framework for companies operating in the spacecom domain to launch space broadband services in India via the low-earth orbit (LEO) and medium-earth orbit (MEO) is a much-needed step to ensure the regulation of satellite internet.