SC no to Ganesh puja at Bengaluru Idgah ground, HC allows it in Hubli

16 Sep SC no to Ganesh puja at Bengaluru Idgah ground, HC allows it in Hubli

General Studies II: Government policies and interventions for development in various sectors and issues arising out of their design and implementation. 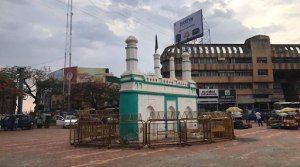 The Supreme court of India didn’t permit the celebration of Ganesh Chaturthi at the Idgah Ground in Bengaluru.

At the same time, the Dharwad bench of the Karnataka high court, declined the stay order of the Hubli  Mayor, allowing the celebration at Idgah maidan in Hubli.

What is an idgah?

Idgah is a term used in south Asian Islamic culture to refer to an open-air enclosure, usually outside the city. The land is reserved for eid prayers, offered in the morning of eid-al -Fitr and eid -al- adha

These reserved lands are usually not used for daily prayers at other times of the year.

Idgah Maidan in Bangalore is 2.1 acres of land in the heart of Chamrajpet, one of the oldest localities of Bengaluru.

The ground is used as a playground, with an Idgah for prayers on the festivals of Eid al-Fitr and Eid al-Adha.

The map of Bengaluru and documents from 1871 and 1938 also state that the land has an Idgah and burial ground.

What are the controversies?

Dr. Badruddin Tyabji,  !st acting chief justice of Bombay High court and, the  3rd president of the Indian national congress was the founder of the Anjuman –I-Islam, he founded this educational and social organization in India in 1874, with a vision of providing better educational and social opportunities to the Muslim community.

What  Anjuman-e-Islam and 999 years lease agreement?

Recently The High Court has seen that the Idgah maidan in Hubbali actually belongs to the Hubbali Dharwad Municipal Corporation and that the land has been leased for 999 years to the Anjuman-i-Islam, is true.

So the High court has declared that HDMC has all the rights over the use of land.

What is a Wakf property?

The Wakf Act defines Wakf as a permanent dedication by a person professing Islam, of any movable or immovable property for any purpose recognized by Muslim law as pious, religious, or charitable.