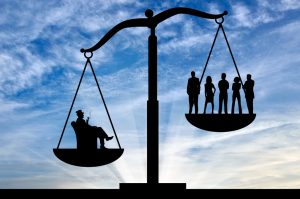 In recent times we have been witnessing the rise in nationalism and authoritarianism, which is weakening the essence of democracy across the globe. Economies are growing  but not achieving  their essential objectives, which have to be like, equitable distribution of resources, reducing inequality and poverty, provisioning of a minimum standard of living for all and ultimately the material happiness for all.

According to the world inequality report 2022, in India the top 10% are holding 57% of the total national income, while bottom 50% are holding just 13% in 2021. The report termed India as a a ‘ poor and very unequal country, with an affluent elite

The trickle down to those below has diminished.  With every Global recession starting from 2008  to  Covid crisis, the rich get richer and the poor find difficulty even in managing even the basic needs.

Democracy and Secularism  are getting weaker while the economy is getting unsustainable and unpredictable.

Economic despair across the globe, which has been the outcome of liberal economic system ( free market system/ Capitalism), has been feeding the nationalist, authoritarian and identity political structure.  The stories which started with liberalism are producing anti-liberal societies.

Western capitalist economies until the 1970s got their public health and educational infrastructure built and strengthened their social security systems with the help of higher taxes.  Even in the field of technology the government spent  huge amounts of money. But then taxes  on incomes and wealth for the top have been reduced regularly. The justification given says that the animal spirits of wealth creators( capitalists)  must not be dampened,  otherwise The pie will not grow and there  will not be enough to share. The tax for the rich is now less and the pie  has not grown but the richest few are having most of it , eating and hoarding. In the case of India taxes on the income and wealth of the rich are still high. In the US the corporate income taxes 21% while in India it is 30%.

Governments are becoming handicapped without resources/ money to provide public goods ( roads, parks, education, health, public transportation etc). For the phone stopped government,  privatization/disinvestment ( selling of public assets to the private party),  asset monetization ( giving public Assets on rent to the private party),  and selling of public Enterprises are becoming  another ideological imperative in economics. The justification given here is that there will be efficiency in delivery of services in case public assets go in the hand of a private party. It is basically  the ethical question of equity, Because of the fact that when  any services provided by a private party/  market,  will no doubt be better in quality but at the same time will be costly. In this situation rich people can even buy more goods and services with their increased income. For example the  wealthier  people’s children  can have better education and health services and will have greater access to opportunities in the future also. The gaps between rich/haves and the poor/have-nots will become larger.

History is repeating itself. The countries which started  practicing liberal economic  policies,  promoting free market system, free trade and privatization  have witnessed the return of nationalism and authoritarian governments, which are being elected across the globe democratically. Their governments  are even challenged by the re-emergence of socialism. Actually people in hopelessness (out of capitalism/ free market system) are looking for messianic saviours by the authoritarian/totalitarian nationalist government sometimes or by  socialist stance of the government. The Hindu Analysis.

Socialism will be always relevant by the time people are having a crisis in managing basic needs of life. Even the capitalist government run their governance keeping social welfare at the center and calls themselves a welfare state.  (GS 3, Economics, The Hindu, Indian Express, RBI)

In this article we mention all information about Socialism still relevant amidst rising Inequity and Hopelessness- Today Current Affairs.