The Doctrine of Essential Religious Practices: Evolution and challenges

20 Sep The Doctrine of Essential Religious Practices: Evolution and challenges 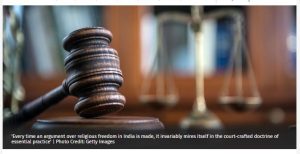 The evolution of the doctrine of Essential Religious Practices (ERP)

The beginning of the doctrine traces its origin to a speech made by Dr. B.R Ambedkar in the Constituent Assembly where he argued that the definition of religion should be restricted to those beliefs and rituals relating to ceremonies that are essentially religious. The State should be allowed to intervene in matters that touch upon religion or are connected with it but are not intrinsically religious. Such an approach helped to differentiate between what was secular from what was religious.

Earlier position was such that Courts refrained from interfering in  question of religious practices. In the Narasu Appa case, the court held personal law, religious customs, usages and beliefs to be outside of the ambit of fundamental rights of equality, life and dignity. The judgment made personal law immune from constitutional scrutiny. This position was later changed by the Shirur Mutt case though the Narasu judgment was not explicitly overruled.

A seven judge bench of the Supreme Court held that the term “religion” will cover all rituals and practices “integral” to a religion. Article 25(2)(a) allows regulation of the economic, political or commercial activities which are associated with religious practices. But the responsibility of determining what all constitutes integral religious practices was left on the Courts. This was decided based upon what practices were considered essential or crucial by religious denominations.

The Allahabad High Court ruled bigamy cannot be considered an integral part of the Hindu religion, and hence not an essential religious practice of Hinduism.

The apex court held that the sacrifice of a cow on the occasion of Eid was not an essential religious practice for Muslims.

The court applied the doctrine to decide that the Tandava Dance was not an essential religious practice of the Ananda Marga Faith. The dance was not performed till 10 years after the establishment of the Anand Marga faith and hence could not be held to be essential practice.Court further observed that in order to determine whether or not a particular practice is an essential part of religion, the test must be whether the absence of the practice itself fundamentally alters the religion.

The Bombay High Court permitted women to enter the sanctum sanctorum of the Haji Ali Dargah. The court stated that exclusion of women from dargahs was not as essential feature of Islam.

The Supreme Court rejected the argument that Triple Talaq was an essential practice under Islam. Court refused to give it Constitutional protection under Article 25. It further held that a practice which is merely permitted or not prohibited by a religion cannot be termed as essential practice. In the instant case, triple talaq was held to be against the basic tenets of the Quran and thus violative of the Shariat.

Sabarimala case rejected the claim of ‘Ayyappans’ (pilgrims) that the exclusion of women between the age of 10 and 50 from entering the temple constituted an essential practice and allowed all Women from entering the temple. Justice Chandrachud criticized the Narasu Appa judgment stating. “Those activities that are inherently connected with the civil status of individuals cannot be granted constitutional immunity merely because they may have some associational features which have a religious nature,” and  “the immunity given to personal law customs deviates from the vision of social transformation of the Constitution”

Issues with the test of essential religious practices(ELP)

There is no clarity in the Constitution regarding what forms part of essential religious practices and the Courts have become the sole authority to decide on this question. Lack of certainty leads to chaos many times. A nine judge bench will soon re-evaluate the “essential religious practice test” in the review petitions filed against the judgment in the Sabarimala case. It is hoped that the judgment will give some clarity on the doctrine and its interplay with Article 13 and Right to Freedom of Religion.

https://bit.ly/3BsPxEX (The Hindu)(The hijab case and the essential practices doctrine)

https://bit.ly/3Sej108 (The Print)(What is an ‘essential religious practice’, and why hijab didn’t make the cut for Karnataka HC)