Why in News: UDAN Scheme of Ministry of Civil Aviation completes 5 years of success.

Ministry: Ministry of Civil Aviation’s flagship program Regional Connectivity Scheme UDAN (UdeDeshkaAamNagrik) has completed 5 years of success since the launch of its first flight by the Prime Minister on 27th April 2017.

Origin of the UDAN Scheme

The scheme was initiated on 21st October 2016 with the objective to fulfill the aspirations of the common citizen by following the vision of ‘UdeDeshkaAamNagrik’, with an enhanced aviation infrastructure and air connectivity in tier II and tier III cities.

In the last five years, UDAN has significantly increased the regional air connectivity in the country. There were 74 operational airports in 2014. Because of the UDAN scheme, this number has increased to 141 by now.

68 underserved/unserved destinations which include 58 Airports, 8 Heliports & 2 Water Aerodromes have been connected under the UDAN scheme. With 425 new routes initiated under the scheme, UDAN has provided air connectivity to more than 29 States/ UTs across the length and breadth of the country. More than one crore passengers have availed of the benefits of this scheme as on 4th August 2022. The scheme has also provided a much-needed platform for regional carriers to scale up their operations.

220 destinations (airports/heliports/water aerodromes) under UDAN are targeted to be completed by 2026 with 1000 routes to provide air connectivity to unconnected destinations in the country. Under UDAN, 954 routes have already been awarded to connect 156 airports.

On the occasion, Minister of Civil Aviation Shri Jyotiraditya M. Scindia said,“The Success of RCS UDAN is a demonstration of the government’s commitment to the Prime Minister’s vision of ‘Ude Desh ka Aam Nagrik’.

It has played a great role in the transformation of the Indian aviation industry. So far under this scheme, we have 425 routes aiming to go up to 1000 routes, and 68 new airports aiming to touch 100 airports. In the next 4 years, we are expecting 40 crore travelers through Civil Aviation in India.

That day is not far when along with rail transport and road transport Civil Aviation will become the bulwark of transportation in India.”

RCS-UDAN was formulated based on the review of The National Civil Aviation Policy (NCAP)-2016 and it was planned to remain in force for a period of 10 years. It has a self-financing mechanism with the development of the Regional Connectivity Fund (RCF). Under this Scheme, RCF was created, which funds the VGF requirements of the scheme through a levy on certain domestic flights. This way, funds generated from the sector themselves stimulate the growth and development of the sector. 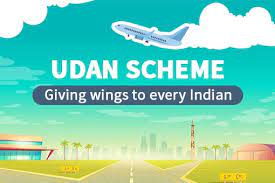 Lifeline UDAN – Lifeline UDAN initiative commenced in March 2020 during the COVID-19 period and it helped to operate 588 flights transporting almost 1000 Tones of voluminous cargo and essential medical services to various parts of the country.

RCS-UDAN was awarded the Prime Minister’s Award for Excellence in Public Administration under Innovation Category for the year 2020.

Republic Day Tableau for 26th January 2022 on UDAN was adjudged as the Best Tableau by the Ministry of Defense.

Phases Under the Scheme

UDAN 3.0: During UDAN version 3.0, to increase the tourism potential in the coastal areas, Tourism routes in coordination with the Ministry of Tourism and Seaplanes for connecting Water Aerodromes were included.

UDAN 4.0: The focus of UDAN 4.0 is on priority areas like the North East Region, Hilly States, Jammu and Kashmir, Ladakh, and Islands. 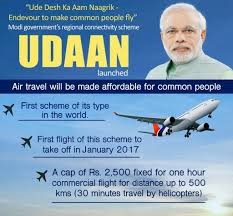 Salient Features of the UDAN Scheme

Current Affairs are a crucial part of UPSC exam preparation. Every UPSC aspirant should read current affairs regularly. So, from today collect the best daily current affairs for the UPSC examination from Plutus IAS and read them properly.

Get also weekly and monthly current affairs for IAS exam preparation from us.