Relevance for Prelims: about the 103 Amendment of  Indian Constitution.

Relevance for Mains: Provisions of Indian constitution on reservation, amendments, and basic structure.

News: The question of the constitutionality of the 103rd amendment that deals with EWS reservation has led to a debate

The dissenting judgment versus the judgment in support of 103rd amendment: 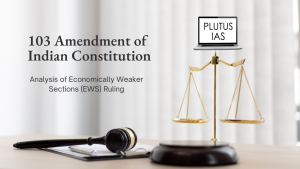 Benefits of the 103 Amendment of Indian Constitution

Drawbacks of the Act:

Question: What is the 103rd Amendment act related to?

Question: The 103rd Constitutional Amendment Act replaces the previous caste-based reservation system with a new one that gives preference to the weaker section of the society. Discuss. (250 words) (250 words)

Article: The dissenting judgment versus the razing of inequality.