Strength:- our manufacturing sector has to grow double digits on a sustained basis.

PLI schemes to create manufacturing global champions for an Atma Nirbhar Bharat have been announced for 13 sectors. 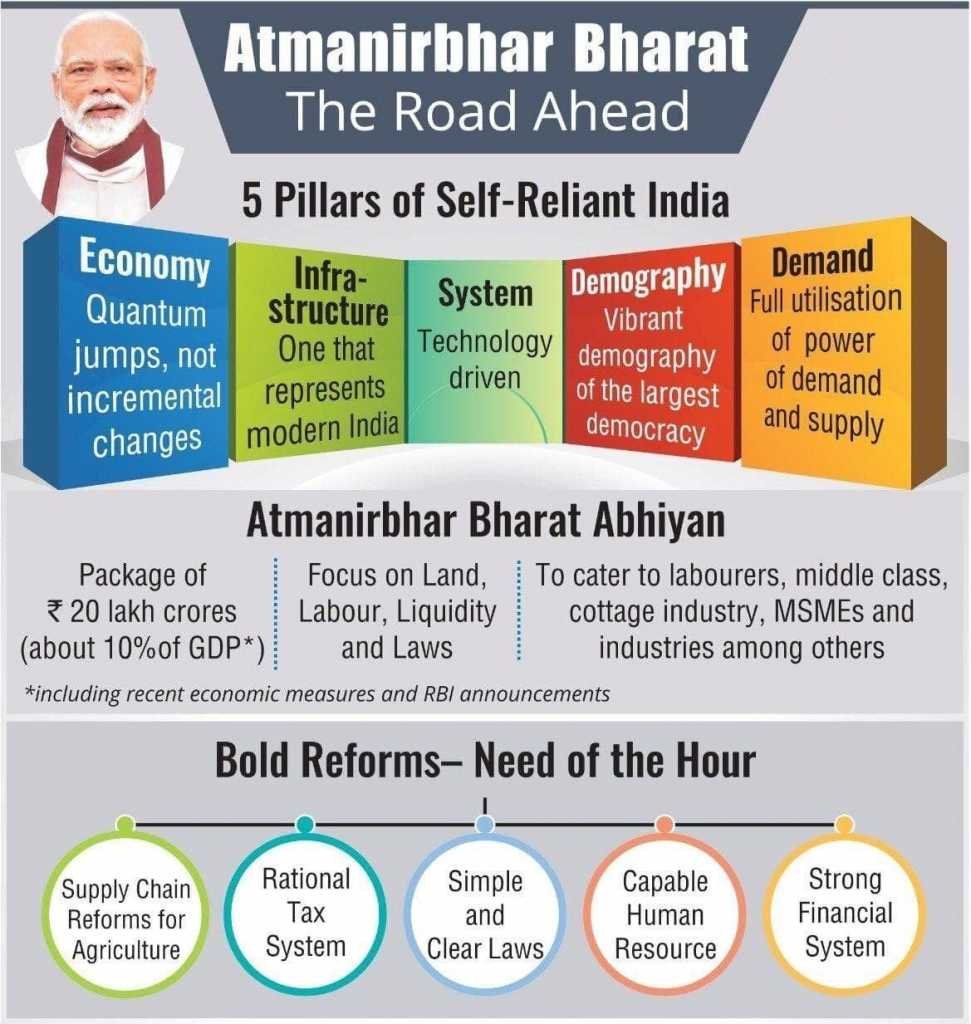 To create world class infrastructure to boost export and FDI.

In India, the term “Public Key Infrastructure” is used in the context of

infrastructure financing.A Bill to set up a DFI will be introduced.

For Passenger convenience and safety the following measures are proposed:

non-strategic and strategic sectors. Government has kept four areas that are strategic where bare minimum CPSEs will be maintained and rest privatized.

●   50,000 annual deaths of children in India is due to Pneumococcal disease( It is an infection caused by the bacteria Streptococcus pneumoniae or pneumococcus)
●   Himachal Pradesh, Bihar, Uttar Pradesh, Rajasthan and Madhya Pradesh are the five states where the usage     of  the vaccine was approved by the Health ministry in 2016.

●  The Poshan scheme was originally launched in 2018 by the Ministry of Women and Child Development to         address the stunting, undernutrition, anemia problems among young children, women and adolescent girls.
●  In 2018, NITI Aayog launched the aspirational districts programme to identify districts which are affected by              poor

●  socio-economic indicators.
●  As a part of the National Nutrition Mission, a supplementary nutrition programme was introduced with the            Integrated child development scheme to provide the subsidized foodgrains to
adolescent girls, expectant and nursing mothers belonging to Below Poverty Line families and undernourished.

●  AMRUT was launched by PM Modi in 2015 to foresee adequate robust sewage networks and water supply for    urban transformation while implementing urban projects for revival.

●  Legacy dump sites are places where wastes have been collected and kept for years. These dump sites contribute  greatly to the air pollution.

Purpose—To raise awareness of what is the crucial role of wetlands for people and planets.

Why celebrated–On February 2, 1971 in the Iranian city Of Ramsar on the shores of the Caspian Sea .First time was celebrated in 1997.

It is prepared by DRDO in October 2020 sanitizes the entire coach in just seven minutes.Earlier, this apparatus used to sanitise the Cinema halls,medical industry. With the help of a remote and switch off button this apparatus operated.

restriction will apply to both,financial and non-financial transactions.To overcome this,PNB will introduce OTP based systems for withdrawing cash.

Non -EMV ATMs are those which read data through magnetic strips and don’t hold the ATM card during the transaction.

A Gandhian route in Myanmar (International relation. The Hindu, GS-2)