What Are Special Drawing Rights (SDRs)?

SDR is an international reserve asset created by the IMF to “supplement the official reserves of its member countries”. SDRs augment international liquidity by supplementing the standard reserve currencies. SDR basket represents the relative importance of each of the currencies as a reserve asset. The composition of SDR has been dynamic and undergone revision every five years.

The weights of different currencies in the SDR basket are determined by a formula involving four factors for a currency. These are: (i) volume of exports in that currency; (ii) forex reserve holdings denominated in that currency; (iii) foreign exchange turnover of that currency; and (iv) sum of international banking liabilities and debt securities denominated in that currency. While 50 per cent weightage is given to the value of exports, each of the other three financial indicators gets a weightage of 1/6. The stronger a country’s economy, the higher quota shares it has. The more quota shares that a country has, the more it pays into the IMF, which comes with greater voting power. 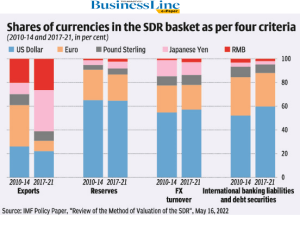 After SDRs have been allocated to each country, they have a few options on how they can manage them. They can hold the allocated SDRs as part of their foreign exchange reserves, sell their reserves, or use their reserves. For example, a member country can exchange an SDR for a freely usable currency. The Hindu Analysis

Members can also use SDRs for other reasons, such as the repayment of loans, payments of obligations, pledges, the payment of interest on loans, or paying for increases in quota amounts 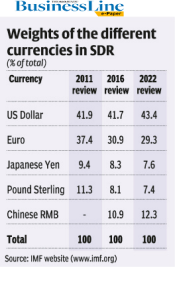 More recently, on May 14, the IMF announced that an updated basket with new currency weights that will come into effect on August 1. Based on data for the five-year period 2017-21, the updated basket assigns higher weights for the US dollar and the Chinese RMB, while that for the pound, the euro, and the yen have been reduced (Table). The RMB is now the third most important currency in the IMF’s SDR basket — next to the US dollar and the euro. As the weights of currencies included in the basket should reflect their relative importance in the world’s trading and financial system.

The IMF member states that hold SDRs can exchange them for freely usable currencies by either agreeing among themselves to voluntary swaps or by the IMF instructing countries with stronger economies or larger foreign currency reserves to buy SDRs from the less-endowed members.10 IMF member countries can borrow SDRs from reserves at favorable interest rates, mostly to adjust their balance of payment to favorable positions.

The SDRi is determined weekly based on a weighted average of representative interest rates on short-term government debt instruments in the money markets of the SDR basket currencies, with a floor of five basis points.

How Much Is a Special Drawing Right Worth? The Hindu Analysis

Why Is an SDR Called Paper Gold? The Hindu Analysis

An SDR is called paper gold because at the time of its creation it was viewed as an asset that could act as a reserve asset that would supplement gold reserves and other currencies, thus the name, paper gold.

In this article we mention all information about IMF’s SDR basket  Today Current Affairs.