The Indian GDP data and its Revisions

Home > Current Affairs  > The Indian GDP data and its Revisions

08 Feb The Indian GDP data and its Revisions 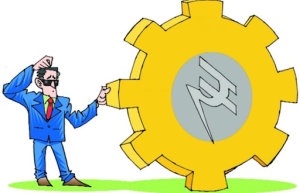 The Indian GDP data and its divisions- Today Current Affairs

The GDP for a country is defined as the money value of all final goods and services produced in its domestic territory during a period of time. In India the  Central statistics office compiles the GDP data for a financial year and for a quarter.

The GDP compilation is a complex exercise which requires huge amounts of data from several sectors of the economy. The data collection is time consuming and thus GDP estimates for a given  financial year are released in a sequence of revised estimates depending on different levels of data availability.

It will present 6 GDP data at different points of time for the same financial year 2021-22 .  Today Current Affairs.

Advance Estimates are initial estimates,  which are more relevant for various stakeholders as they are available within the financial year. However the true picture of the economy in terms of the magnitude and direction of growth unfolds over the entire revision cycle.

The First Advance Estimate of GDP is presented in the month of  January before the presentation of the Budget on 1st Feb, so that the Central Budget can use this data in its allocation of expenditure. The Hindu Analysis.

The Advance Estimate uses 7 to 8 months data ( and then projected for full year) on high frequency indicators that are assumed to capture the level of economic activity in each sector. The Provisional Estimate is the first full year estimate as it is based on 12 months of data on all sectoral indicators. Many Scholars have argued that data revisions contain both “news and noise” about the economy’s growth performance.

As initial estimates are compiled with incomplete data or proxies based on high-frequency indicators, there is likely to be more noise in these estimates. Gradually with data availability, the extent of noise is expected to diminish, and the revised estimates start to reflect ‘news’ about the state of the economy.

The revisions in GDP data play a crucial role in policy formulation and business decisions. Advance Estimation of GDP is important for macro economic assessment,  while the revision cycles help us to understand the genuine macroeconomic fluctuations. Today Current Affairs.

RBI earlier has raised concerns about the numerous revisions in the gross domestic product data by the Central Statistics Office, as this confuses analysts about the economy.

Here we mention all information about The Indian GDP data and its divisions Today Current Affairs.