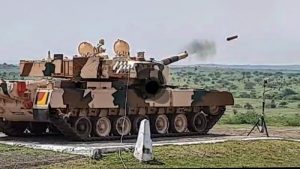 The missiles hit with precision and successfully destroyed the targets at two different ranges. Telemetry systems have recorded the satisfactory flight performance of the missiles.

It was formed in 1958 by the merger of the Technical Development Establishment and the Directorate of Technical Development and Production of the Indian ordinance factories with the Defense Science Organization. Subsequently, the Defense Research & Development Service (DRDS) was constituted in 1979 as a service of Group ‘A’ Officers / Scientists directly under the administrative control of the Ministry of Defense.

The missiles can be transported by a single soldier, to larger tripod-mounted weapons, which require a squad or team to transport and fire, to vehicle and aircraft mounted missile systems.

This type of guided missiles rely on an electro-optical imager (IIR) seeker, a laser or a W-band radar seeker in the nose of the missile.

These are ‘fire-and-forget’ missiles where the operator can retreat right after firing as there is no more guidance required.

The ATGM has been developed with multi-platform launch capability and is currently undergoing technical evaluation trials from the 120 mm rifled gun of MBT Arjun.

Some other Anti-tank Missiles:

It has a maximum range of seven kilometers and has been designed and developed for integration on the weaponized version of the ALH (Advanced Light Helicopter).

The missile system has all-weather, day, and night capability and can defeat battle tanks with conventional armor as well as explosive reactive armor.

It is a third-generation fire-and-forget missile developed for mechanized formations to engage heavily fortified enemy tanks.

It is a Smart Stand-off Anti-Tank Missile being developed for launch from the Mi-35 Helicopter for the Air Force’s anti-tank operations.

It stands for Man-Portable Anti-Tank Guided Missile which has a range of 2.5 kilometers, with fire-and-forget and top attack capabilities for infantry use