What are Scheduled Tribes (STs)?

Due to the social, economic and educational backwardness and exclusion of certain communities in India, the framers of the Constitution recognized the need  to grant these communities special consideration for safeguarding their interests and for their accelerated socio-economic development. These communities were notified as Scheduled Tribes as per provisions contained in Article 342 of the Constitution of India. As per Census 2011, the ST population in the country is 104 million which accounts for 8.6% of the nation’s total population. 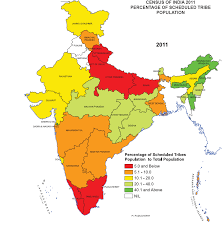 Criteria to be identified as ST

Government of India has adopted the following five criteria to identify a community as a Scheduled Tribe:

(i) indications of primitive traits,

(iv) shyness of contact with the community at large, and

How are STs notified?

According to the Constitution of India, under Article 342(1), The President of India, may with respect to any State or Union territory, and where it is a State, after consultation with the Governor thereof, by public notification, specify the tribes or tribal communities or parts of or groups within tribes or tribal communities which shall for the purposes of this Constitution be deemed to be Scheduled Tribes in relation to that State or Union territory.

However, under Article 342(2), the Parliament of India by law can include or exclude  the above-mentioned groups from the list of Scheduled Tribes specified in a notification issued under clause(1)

Based on Article 342, Parliament enacted The Constitution (Scheduled Tribe) Order, 1950 which contains a list of tribes designated as Scheduled Tribes.

The National Commission of Scheduled Tribes(NCST) is a constitutional body  formed through the 89th Constitution Amendment Act, 2003 by insertion of Article 338A in the Constitution. It essentially works to protect and promote interests and welfare of STs by monitoring safeguards for them, inquiring into complaints of deprivation of rights of STs and making recommendations for their socio-economic development. Additionally, it also presents annual report to the President upon working of safeguards for STs.

Land alienation:  STs were traditionally land holders. Due to fast paced development and stringent laws, their land has been taken away for industrial and mining purposes. They have also been ousted due to laws regulating wildlife sanctuaries and reserve forests

Loss of community forest rights: The Tribal rely on minor forest produce for their sustenance, fuel, fodder and livelihood. British rule led to them losing these rights.

Poverty and exploitation: They do not possess employment opportunities and often live in poverty and indebtedness. Due to their seclusion, they are often exploited and forced into bonded labor or trafficking.

Low level of Health and Nutrition: There is a high infant mortality rate and low levels of life expectancy among STs and prevalence of disease burden like anemia, malaria, cholera, tuberculosis, etc due to poor nutrition.

Loss of identity: The modern institutions and laws are different from the traditional laws and lifestyle of tribal. There is also extinction of their language and dialect in some cases which all culminates to feelings of alienation and loss of identity.

There needs to be understanding and respect of tribal culture and practices and promote them. Economic development should not exclude tribal population and it should not be at the cost of uprooting them. Various constitutional and legal safeguards in the form of insertion of 5th and 6th Schedule in the Constitution, creation of Tribal Advisory Council, the Forest Rights Act (FRA), 2006 which recognizes the rights of the forest dwelling tribal communities and other traditional forest dwellers to forest resources, Pradhan Mantri Van Dhan Yojana (PMVDY), etc go a long way in promoting their welfare.