Relevance for Mains: Need for Carbon Tax, Implication of CBT

Context: The European Union in COP-27 has proposed a Carbon Border Adjustment Mechanism- to charge duty on the products such as cement, steel, fertilizers, and aluminum. 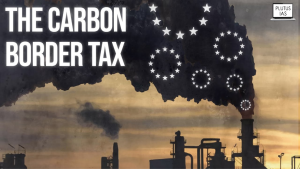 Need of Imposition of Carbon Tax:

The carbon Border Adjustment Mechanism may spur the adoption of cleaner technologies but without adequate assistance for newer technologies could rather become disadvantageous for developing countries.