The Central Government has constituted a three-member commission of Inquiry headed by ex-CJI Justice K.G. Balakrishnan to examine the issue of extending Scheduled Caste status to  Dalits who have converted to religions other than Buddhism or Sikhism. The Commission will submit the report within 2 years. 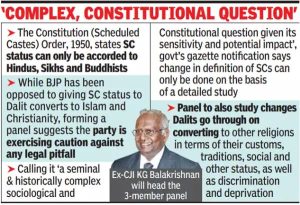 The commission will examine the issue and make then report its recommendations. Only then can a logical step be taken in that direction. If the community indeed faces the discrimination it claims then the policy of reservation should also be extended to them to make India truly inclusive.

https://bit.ly/3MlsHnV (The Hindu)(Panel to study SC status of Dalits post-conversion)