Relevance for Prelims: Inflation in the United States and its implications on Global World

Recently, the Inflation level in the United States has surpassed 6%, the highest ever in the last 30 years. These figures are attracting a lot of attention around the globe leaving repercussions everywhere.

There are many reasons which could be attributed to an increase in inflation such as an increase in money supply by Fed Reserve Bank, Handout-induced, and supply-side disruptions. 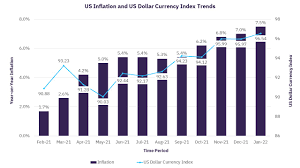 Inflation in the US

IMPACT OF INFLATION IN THE UNITED STATES ON INDIA

To deal with this situation, RBI might have to align its policies with global ones as imported inflation is one of the worst to deal with.

Current Affairs are the most important part of the UPSC examination. Every UPSC aspirant should read current affairs regularly to enhance their general knowledge. Daily Affairs are the source of the news of the national and international world. Every UPSC aspirant should have to be an expert in every aspect of the news on Political, Economic, Social, General Science, and other aspects. Current Affairs are the main source of acquiring knowledge on these aspects. Here, Plutus IAS provides the best daily current affairs for the UPSC examination. So, collect the latest daily current affairs for us today and read them properly.