On the 75th independence day PM gave us the mantra to be a developed country by 2047. He also emphasised on the scientific temper and inculcation of that attitude in the society.

Scientific temper is not a new term to Indians as well to our highest law of the land i.e., the Constitution. It forms the very psyche of the rational and modern value based society which believes in science and its potential. The term holds much significance in the prevalence of some unscientific practices like witch hunting, irrational treatment of the disease and others. In this article I will try to explore more.

WHAT IS SCIENTIFIC TEMPER?

The term is also difficult to define as like to follow. It is a modest temper which is ready to accept new values, ideas and practices based on scientific clarity even if they are against the established norms and culture. It is a broad term which demands analytical inquiry of the facts and then putting them on the burner of the science to test. The result is, no doubt, a more rational and humanistic approach.

Former PM Nehru famously said “ scientific approach or temper and, or should be, a way of life , a process of thinking, a way of acting and associating with our fellowmen”. 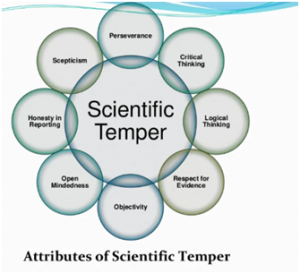 DOES CONSTITUTION RECOGNISE IT?

Indian constitution being a ‘Living document’ has ample space for rational and scientific society. It was added by 42nd constitutional amendment as the Part IVA of the constitution. Part IVA deals with the citizenry duties and to make the Indian state an active citizen participating society.

ARE WE FOLLOWING THIS DUTY?

Indian society as a mix of various cultures and values, practices inherently holds the value of scientific temper and humanism. The societal values of equality, rights, donation and other practices are indicative of duty bound citizens. Our school books and even religious textbooks also promote the spirit of inquiry and value of reform on which our child builds a culture of scientific achievements such as IPRs, various tech inventions and many supertech officers are Indians.

Any duty is partially corrupt. Though we follow scientific temper by laws and on its face value, the following in its spirit still seems a distant dream. Take for example, even in the Government offices we still do ‘Pooja’ of the instruments and infrastructure which does not have any scientific rationality as such. Even in elections some jinx’s are famous as Noida Jinx. Such a state promoted irrationality in the affairs which citizens considered then legitimate.

Even lack of scientific temperament is still prevalent by the untouchability (against Art 17), discrimination based on religion and work and social bycott for inter-caste marriage and witch hunting are examples of societal violations of the duty.

On an individual level we still think of ourselves as more rational and full of scientific temper. But here also seems some discrepancy as it’s common family practice to keep menstruating women isolated though science says against it. We still change the root if black cat cuts in between. Even we see our results on specific PC or in a café or on mobile as if the result would change on others. Don’t we do it?

The scientific temper is not the need but the necessity. Active efforts are needed to put rational temperament in the society. Short term and long term measures can be put in place. As laws and regulations act against superstitions in states like Maharashtra and awareness in the society for rational values. State also needs to rectify its approach that should send the correct signal.

In the long run, education is the best tool to change the world (Nelson Mandela). Our Gen Z and generations to come must be value based and scientifically oriented to contribute positively towards national development. Thus, it is our legal as well as humanly duty to follow scientific temper, humanism and continue the ignited flame of inquiry to make this great nation great again.