The topic is based on the significance of National Energy Conservation Day. The article also tells how Energy conservation impacts Environment and climate change.

Relevance for Mains: Steps taken by India to conserve energy

Reason for the celebration of National Energy Conservation Day 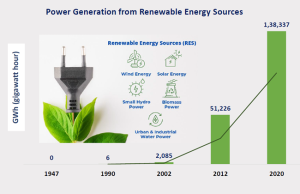 The scenario of India’s power sector:

Steps were taken by India for energy conservation:

The global power sector is undergoing an accelerated transformation due to technological innovations and response to climate change protocols. At COP-21 in Paris in 2015, India committed to a 40% share of power generation from non-fossil fuel sources. We have achieved this target a decade ahead of the 2030 timeline.

India has always shown its willingness in leadership to fight climate change. The country’s vision is to achieve Net Zero Emissions by 2070, in addition to attaining the short-term targets which include:

India’s experience will be valuable to other developing nations as they translate their climate pledges into actions and undertake energy transitions toward a more sustainable energy future.

Q1- On which of the following can you find the Bureau of Energy Efficiency Star Label? (2016)

Select the correct answer using the code given below:

Describe the major outcomes of the 26th session of the Conference of the Parties (COP) to the United Nations Framework Convention on Climate Change (UNFCCC). What are the commitments made by India at this conference?

For becoming an IAS officer, every aspirant have to clear the IAS examination process like Prelims, Mains, and Interview exam. If any UPSC aspirant wants to pass the UPSC examination, he/she has to enhance their general knowledge. Reading current affairs collaborates the examinee with increasing general knowledge. So read updated current affairs for your IAS exam preparation.