The article covers all about National Food Security Act includes about the Act, Eligibility Criteria, Provisions of the NAFA act 2013, and Subsidies. The topic is based on the Indian Polity and Governance- Constitution.

Context: There have been several petitions have been filed in the Supreme Court regarding the expansion of coverage net of the National Food Security Act which provides food at subsidized prices.

The main objective of the act was to provide nutritional security in the human cycle approach by ensuring an adequate quantity of quality food at affordable prices to people a life with dignity.

The act covers 75% of the rural population and up to 50% urban population under the Targeted Public Distribution System. The act in total covers 67% of the total population. 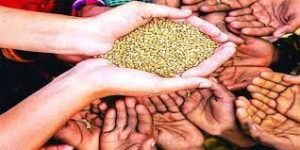 Priority households To be covered under TPDS, which are being provided food at affordable prices to people to live a life with dignity.

The government spends around 1.75 lakh crores every year in PDS subsidy. In Economic Survey, Chief Economic Advisor argued that the government has highly subsidized food prices in India and has never increased the prices of food given under Fair Price Shops though there is a provision for an increase in the price of food every three years.

Foodgrains under NFSA were to be made available at subsidized prices of Rs. 3/2/1 per kg for rice, wheat, and coarse grains respectively for an initial period of three years from the date of commencement of the Act (July 13, 2013). Thereafter, prices were to be fixed by the Central Government from time to time, but not exceeding MSP. The government has decided from time to time to continue the above-mentioned subsidized prices under NFSA and their validity has last been extended up to June 2019.