The topic is based on UAPA Act. It tells how the Rejection of the Delhi Interpol Red Corner impacts Indian Polity and Constitution.

Who is the ‘Sikhs for Justice (SFJ)’ group? 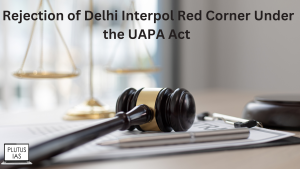 What is the history of the Khalistan movement?

The course of the Khalistan Movement

How this movement affected Indo-Canadian relationships?