This article is based on the “Act East Policy“. It talks about India and its neighborhood- relations significance of  Soft Loans by India

Relevance for Mains: Significance of the act, Neighbor relations of India

Context: Foreign Secretary of India and G-2- chief coordinator said the volume of India’s soft loans to neighboring countries has increased from $3 billion to almost $15 billion in the last eight years.

3. North-East Development: Integration with South-east Asian and East-Asian economies will aid in development of North-East states.

4. Security Engagement: India’s defence cooperation with South-Asian economies have increased. For example: In 2014, India and Vietnam signed a MoU (Memorandum of Understanding) to open a line of credit for purchase of defense equipment. 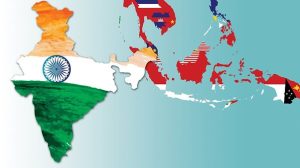 Pic: India and its neighborhood

1.  Chinese Dragon influence: Growing Chinese influence with increasing hostilities with India on border areas is a major roadblock to the development of the ASEAN region.

2. There is a scarcity of economic agreements signed between India and South-East Asian economies. So far, India has signed a few agreements on reaping Blue Economy.

3. Civil Society’s attitude is impacted by India’s majoritarianism attitude over one religion.

4. Protectionist policies have increased which has hindered the integration of economies.

There must be empowering of states by the government to play a better role under the Act. For example, Northeast states could be used to bridge the gaps between the Centre and States while implementing Act East.

Neighboring countries such as Bangladesh and Sri Lanka should also be added which would ensure better development of India’s eastern and north-eastern states.