The topic is based on the Right to reproductive choice: Supreme Court extends the right to safe and legal abortion to single, unmarried women. The article talks about how the Supreme Court Ruling on Abortion impacts Indian Polity and Governance- Constitution.

Supreme Court has extended the right to safe and legal abortion up to 24 weeks to unmarried single women. Holding the distinction created between married and unmarried women as artificial and constitutionally unsustainable, it allowed termination of pregnancy between 20-24 weeks on certain exceptional grounds. The court held it is the right of every woman to make reproductive choices without undue interference from the state. Court also included victims of marital rape under the MTP act. 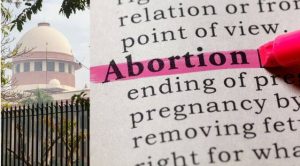 THE LAW ON ABORTION

The law on abortion in India is governed by the Medical Termination of Pregnancy (MTP) Act, of 1971 which was amended in 2021 to incorporate certain changes. The act provides for the termination of certain pregnancies by registered medical practitioners. The various provisions governing different time periods in the pregnancy are given below:

SIGNIFICANCE OF THE RULING

We should strive to provide complete bodily autonomy, inclusivity, and reproductive equity to women. The right to abortion is closely linked with the Right to life under Article 21. Every woman should have access to safe and legal abortions with integrity.