The recent incidence of 8 Congress MLAs switching to BJP has again brought to the limelight the blatant violation of anti-defection law India. A similar incidence of floor crossing by legislators was earlier witnessed in Maharashtra when factions broke out within the Shiv Sena.

What is the Anti-Defection Law?

The10th Schedule, commonly known as Anti-Defection law, was inserted in the Constitution by the 52nd Constitutional Amendment Act, 1985. It was brought into force to curb the frequent defections by MPs and MLAs. This trend was so frequent that it gave rise to the infamous phrase of ‘‘Aaya Ram Gaya Ram’ as in 1967, a Haryana MLA changed his party allegiance thrice in a fortnight.

Anti-Defection law contains provisions for the disqualification of elected members by the Presiding Officer on the grounds of defection to another political party. 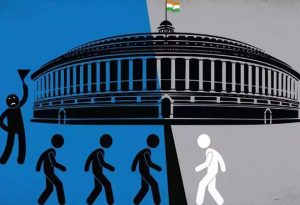 What does the Apex Court say?

What should be done to strengthen the Anti-defection law?

There is a need to re-look the provisions of anti-defection law and make it stronger. The Members of Parliament and Legislatures are the elected representatives. Changing political parties is a fraud on the mandate of the citizens. Redefining the merger clause and shifting the adjudicatory power from the Speaker to some other credible authority is absolutely needed. The vibrant democratic values enshrined in the constitution should reflect in our Political system.

https://bit.ly/3RTfN2y (Indian Express) (Goa defections frame the Opposition’s challenge: Why can’t they keep their flock together?)

https://bit.ly/3S7ANlB (India Today)(Explained: The anti-defection law and why it still remains a toothless tiger)