The article talks about how the 5G Network impacts telecommunication, the economy, Network development, Public safety, and other sectors in India.

Fifth Generation network (5G) is a global wireless standard network that is designed to improve network connections by addressing legacy issues of speed, latency, and utility.

It is designed to transmit data almost instantly with a network latency of less than 10ms. The government recently garnered more than $1.5 lakh crores which indicates the soaring interest of telecommunications companies in new technology which is considered a critical enabler of the 4th Industrial revolution.

Significance of the 5G network in the development of India 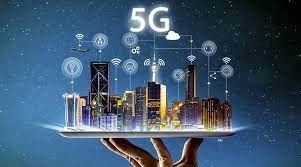 The government shall give adequate support to telecommunications companies to roll out 5G networks at affordable prices by keeping down the spectrum prices at the lowest price level. Along with

So, Read daily, weekly, and monthly current affairs from Plutus IAS for your IAS exam preparation.