The article talks about how the Global Biodiversity Framework impacts Environmental Ecology as well as biodiversity and climate change.

Realizing that multisectoral engagement and prompt, comprehensive action are required to stop and reverse biodiversity loss, conserve it, and use it sustainably. 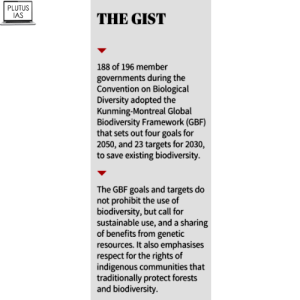 The statement specifies 17 commitments for member nations and sets basic goals for the restoration and protection of biodiversity. These pledges call for improved domestic and international cooperation on a number of fronts.

Ensuring the creation, acceptance, and use of a successful global biodiversity framework for the years after 2020 in order to stop the current loss of biodiversity and put it on a “path of recovery” by 2030.

Expanding the use of ecosystem-based strategies:

What does it intend to accomplish:

Ques: The Millennium Ecosystem Assessment describes the following major categories of ecosystem services-provisioning, supporting, regulating, preserving, and cultural. Which one of the following is a supporting service? (2012)

a) Production of food and water

b) Control of climate and disease

Ques: With reference to ‘Global Environment Facility, which of the following statements is/are correct?

a) It serves as a financial mechanism for ‘Convention on Biological Diversity’ and ‘United Nations Framework Convention on Climate Change’.

c) It is an agency under OECD to facilitate the transfer of technology and funds to underdeveloped countries with the specific aim to protect their environment.

Ques: With reference to a conservation organization called Wetlands International’, which of the following statements is/are correct?

Select the correct answer using the code given below.

So, get the best daily, weekly, and monthly current affairs for the UPSC examination from Plutus IAS.