Evaluation of the French format on Russia Ukraine Crisis

10 Feb Evaluation of the French format on Russia Ukraine Crisis

Context : Recently the visit of French President Emmanuel Macron to Russia bears fruits which paved the way for peace at the Ukraine border and Russian leader Vladimir Putin assured him that Russia would not escalate the crisis. 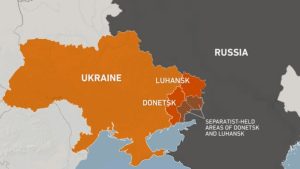 The Normandy Format  was a format of talks to stop Ukraine Russian war in 2014 . In this format mainly four countries participated two- Russia and Ukraine and two other mediators Germany and France . It was concluded in  Normandy, France, It  was an effort to resolve the war in Donbas. It has also been known as the Normandy contact group.

It is an agreement concluded at the end of war between Russia and Ukraine in 2014 in the Donbas region of Ukraine. It was written in 2014 by the Trilateral Contact Group on Ukraine, consisting of Ukraine, the Russian Federation. It was written by  5 September 2014 in Russian language

Definitely , the effort of France and Germany is appreciable and these two countries of Europe are trying to save Europe from another disaster but the American attitude before one month on the issue of this Crisis would have enhanced this tension .

In this article we mention all information about Evaluation of the French format on Russia Ukraine Crisis Today Current Affairs.