Russia Ukraine War : An effort to reinstall the old regime of the great Russian Empire

05 Mar Russia Ukraine War : An effort to reinstall the old regime of the great Russian Empire

Context : Entire world is being influenced by the Russian Ukrainian War. Thousands of the foreigners are stuck in the war zone of the Ukraine and their countries are trying to evacuate them from the war zone. Russia also has to face a huge economical crisis in future. Definitely there was a big and significance concern of Russia regarding her own security so it had to fight this war

The Ukraine-Russian war should not be seen in a single frame of reference which has been set up by the western media. There are several causes behind the Russian invasion over Ukraine  which have existed in the history of Russia. However modern causes are also significant causes but these modern concerns are  highly influenced and inspired from the glory of the great Russian empire of Slav race . During the 17-18th centuries , Russia was one of the largest empires of the world and the glory of Russia had reached its zenith during the regime of Catherine . however she was influenced by the Renaissance thinkers and because of their influence she brought drastic reform in their country.

About the period of Catherine : The Hindu Analysis

Russian Princess Catherine was from a poor German family and married to Peter of Russia . She grew up in Russia and Germany under the atmosphere of conspiracies and the conflict for power . She , however, brought drastic reforms in administration for the public welfare but still she strengthened her dictatorship and established the rule of law strictly.

She believed in the imperialism approach. She expanded her state beyond the Ural mountain along with the Caspian sea  and up to the northern shore of black  Sea by conquering the Crimea Peninsula (1783 ). Under her regime, Russia not only benefited with the expansion of trade and commerce but also with annexation of many disintegrated states of the ottoman empire. She promoted large-scale foreign colonization and peasant resettlement in the south. Under her regime, she not only settled new towns like Odessa, Kherson, Nikolayev Taganrog and Mariupol (All are in modern Ukraine) but also developed through the establishment of educational institutions . Gradually these towns became the center of Russian culture,  contributing to the reorientation of Russia’s pattern of trade with the development of agricultural exports from Russia ( Modern Ukraine). Local society was transformed on the Russian pattern. Landlords on a large scale were involved in Russian elites .

Integration of the new region brought the problem of minorities who were from the different cultures (Non Russian) . She tried to culturize Non Russian culture and up to maximum extent she had succeeded but in the region of Siberia , certain evidence of the cultural conflict exists. The Hindu Analysis

Up to the Crimean war (1853), Russia had strengthened her states which could not be tolerated by the western countries and from then, these countries are continuously trying to disintegrate Russia with the support of Turkey .

Up to the time of the formation of the USSR in 1917 (With Bolshevik Revolution of October) the territory of Russia had extended more than 6,800 miles (10,900 kilometers) from east to west, covering 11 of the world’s 24 time zones. The most westerly point was on the Baltic sea and the easternmost was Cape Dezhnev on the Berlin Strait nearly halfway around the world.

It extended from Cape Chelyuskin to Kushaka (From North to south) Nearly half of the territory of the U.S.S.R. was north of 60° N, at the same latitude as Alaska, Baffin island and Greenland .  Approx. 78 % of the population of the USSR was from the Slav tribe (As per the census of the USSR in 1990s) . Almost all Ukrainian are from Slavs ethnics group .

Therefore , emotional attachment of the Ukrainian should be closer to Russian , not to western countries 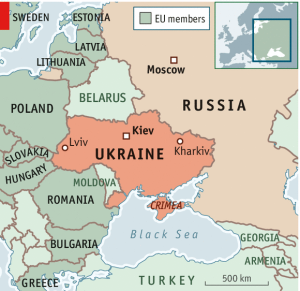 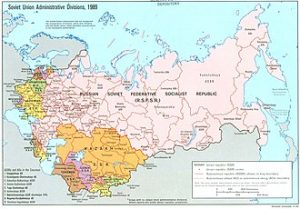 Putin again thinks to reinstall the old Russian regime and all the Slavs under a single  political authority . gradually he has shown his objective . However he has declared the reason for his invasion is to ensure his territorial security from the west (NATO). But the similarities of the race and the old great Russian history definitely would have been one of the reason of the Russian invasion on Ukraine

The interest of Ukraine should exist in Russia rather than western countries. These Countries are capitalist in nature and have been involved in economical exploitation of the Asian and African countries in the name of democracy and the expansion of civilization . Ukraine and the Ukrainian must understand this fact that the culture and ethnics similarities are the most important tool for emotional attachment . Therefore the interest of Ukraine lies in the interest of Russia . Since Russia is a big country and will  never tolerate that her disintegrated country would go in the camp of her permanent rival who had always tried to defeat and subjugate Russia .  The Hindu analysis.

Here, these days , the west is provoking Ukraine continuously but who is being influenced with the evil effect of the war- Only one culture is Slavs / Russian (either from Ukraine or from Russia) as well as Indian type countries who have been victims of colonialism for a long time and who are being benefited – only Western countries, by selling their arms to Ukraine and giving loans .

In this article we mention all information about Russia Ukraine War – Today Current Affairs.