Significance of Amara jawan Jyoti in Indian History : An Analysis

Context : The iconic Amar Jawan Jyoti, which was inaugurated after the 1971 Liberation War of Bangladesh by former Prime Minister Indira Gandhi, was removed on Friday

Introduction : Amar Jawan Jyoti is not only  a symbol of the tribute which we are paying to our martyrs who had sacrificed during the Bangladesh war but also is the symbol of Indian cultural Heritage .

The removal of Amar Jawan Jyoti and its merging with  the flame at the National War Memorial (NWM) is somehow the change in traditional culture or destruction of our cultural heritage . Cultural heritage is the legacy of tangible and intangible heritage assets of a group or society that is inherited from past generations.

Transformation or and modification in the traditional value system is just the destruction of cultural heritage . Cultural Heritage is the symbol of our identity. Its destruction means an effort to eliminate our identity and value system . Amar Jawan Jyoti is the recognition of our bravery, our sacrifices , our pride.  And the removal and its merging with the national war memorial is definitely an effort to transform our cultural value system . Instead of AMAR jAwan Jyoti, construction of statue of Subhash Chandra Bose is not any alternative of objectives of Amar Jawan Jyoti

Amar Jawan Jyoti is an Indian memorial constructed after the Indo-Pakistani War of 1971 to commemorate the martyred and unknown soldiers of the Indian Armed Forces who died during the war.

This eternal flame has been burning for 50 years without being extinguished. But by 21 Jan 2022, this Jyoti was finally put off and merged with another flame at the national war memorial . 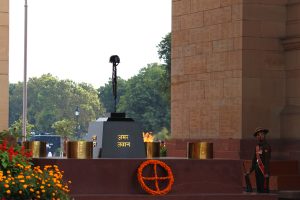 How it is related with our tradition and Culture :  The Hindu Analysis

In our traditional value system , the soul is eternal and it never dies and the flame is the symbol of the souls of the martyrs . Extinguishing the flame for a single moment is considered as disrespect towards the martyrs . Just like two souls can not be merged , two flames can also not be merged, one flame has to be extinguished. Once this flame has been established neither it should be removed from that place nor it should be destroyed until or unless big inevitable reason. This flame is related to our emotions and sentiments . Just like , removal of one temple /any religious places from one place and merging with another temple/ religious place is the act of dishonor to a religion , similarly This Jyoti is also associated with the emotions of every Indian citizen.

Why Government wants to remove this Jyoti :  The Hindu Analysis

In fact , Central Vista programme is the main reason for the removal of this Jyoti but the government explains that this Jyoti is situated underneath India gate which is the symbol of colonial period so Amar Jawan Jyoti from here should be substituted. Another big reason may be political. Since this Jyoti was established by Smt Indira Gandhi in the memory of victory of Bangladesh War, because of the political rivalry and to reduce the credit of Smt Gandhi ji , this identity is being shifted.

What is the reason of protest against this decision of Government: The Hindu Analysis

Government explained that India gate is the symbol of colonial period and it was built during 1931 and it is dedicated to those soldiers who had sacrificed in the war to protect the British imperialism . India gate is the symbol of colonialism but we can not forget the sacrifices of those Indians who fought for British rule. Since at that time also, they were paying their duties and obeying the British Government. From this perspective, sacrifices should not be undermined  because the concept of patriotism varies as per the governments . They also fought to protect India from other enemies . Most of the British officers who had served India after 1947 and 1950 who did their commendable job. So India gate may be shifted but the martyrs whether they were of British period (If they are Indians) or from any other time period must be honored .

What is the alternative: The Hindu Analysis

Because of the big protest by the opposition party, mainly congress, the Government should not remove this Amar Jawan Jyoti. If it is transferred , it should be extinguished and both different flames should be burning in the new national War memorial . making the statue of Subhash Chandra Bose is not the alternative of the shifting of Amar Jawan Jyoti

In This way , We conclude that All of us should respect our culture , our traditional value system. Because of political rivalry we should not divide  Martyrs in this way so that the martyrs of the particular  regime is greater than the martyrs during the  regime of the rival political party.

This is not nationalism in reality. To respect the culture, emotions of citizens and the well being of the citizens irrespective of religion , caste, creed is the real nationalism . Traditional value system or cultural Identity is most significant for the providence of any nation . Therefore it must also be preserved